What Makes You Muddy? – Winners

In September we launched our photo competition, entitled What Makes You Muddy?, asking people to send in pictures of what being ‘muddy’ meant to them.

We received 40 photos, that spanned the full spectrum of what it is to be ‘muddy’, ranging from the literal (lots of mud covered people) to countryside scenes and outdoor pursuits.  Animals also featured heavily in the photos; including sheep, dogs, horses and cattle.

We were so impressed by the collection that we awarded every person who entered a week’s free subscription to Muddy Matches and three lucky winners also took the top prizes.

Roger’s photo made us laugh out loud and was a unanimous winner, scooping him a year’s free subscription. We’re not sure that his Labrador puppy, Bracken was quite as impressed with his antics.

We were slightly worried that Joanna had been mown down by her over-enthusiastic sheep in this photo, but we awarded her six month’s free subscription anyway for this amusing up-turned farmyard shot.

Lydya’s photo really caught our eye, as I must admit it’s not every day that you see a photo of a lady learning how to work the land using Oxen. Lydya who developed a soft spot for the “big hearted” animals has won a three month long subscription to Muddy Matches. 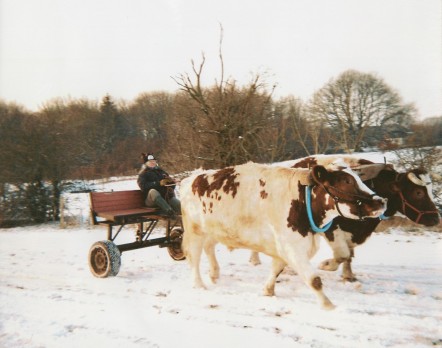