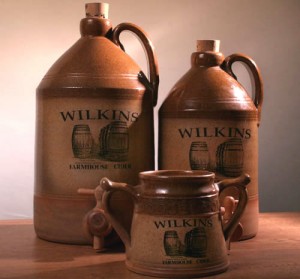 Deep in the heart of Somerset, Land’s End Farm, where Roger Wilkins makes his farmhouse cider, is a bit of a gem and, if you successfully manage to navigate the winding narrow roads that lead there (no mean feat in a motorhome) you will probably be in need of a drink!

When we arrived, Roger was busy pressing apples but stopped briefly to indicate where the half pint glasses were, and then pretty much left us to get on with it. This is a ‘no frills’ traditional ciderhouse with just dry and sweet farmhouse cider on offer. If you want medium, you can blend it yourself.

It might have been 11am, but we were by no means the first arrivals. Cider in hand, we tentatively sat down at the wooden table, where we got chatting to Frank and Gibby, two lovely old boys who regularly make the trip up to Land’s End Farm from Glastonbury to have a bit of a yarn and stock up on cider at £5/gallon. Roger also sells cheddar and stilton cheeses, as well as vegetables, eggs, chutneys and pickles, all of which are produced locally. Our new friends kindly shared a plate of his cheddar with us, which was the perfect accompaniment for the dry cider.

The cider itself was delicious. Slightly suspicious of the stuff after too much Diamond White in our teens, we were pleasantly surprised by this flat and fruity liquid. Don’t be fooled by how easy it is to drink though; at 6.5% you don’t want more than half a pint if you’re the one who’s got to navigate your way back to the main road!

The key to its flavour is in its purity. The apples are picked, left to mature for a bit and then crushed. The resulting pulp, or ‘pomace’, is then added to the press, layer-on-layer and wrapped in hessian.  Once this has done its job, the freshly pressed juice is piped into large vats, where it is left to ferment naturally and then mature. The pressed pomace, which is solid by now, is then sold on for cattle feed. No water is used and the only thing that might be added is saccharin if Roger is making the sweet cider. And – give or take the odd detail and a few technical terms – that’s it!

We highly recommend this little adventure if you’re ever in the South West. Although, allow plenty of time to enjoy yourselves properly – we originally only planned to pop in, but soon realised that was impossible!