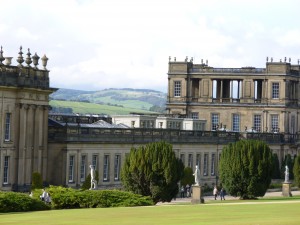 From adaptions of Jane Austen novels to cheesy rom-coms, if your date enjoys romantic films then why not visit one of the locations of their favourite films? I’ve divided the film locations into regions, to help you to find a film set date in your area and snuck two cult TV series on to the end of this blog post for good measure.

Somerset House – The Ice rink at Somerset House in London is probably the most famous rink in the UK and is also the setting for the one of the most romantic scenes in Love Actually. The ice rink is only open for a couple of months a year, but Somerset House is a fantastic place to visit all year round if you fancy a bit of culture.

Stourhead House – For Palladian architecture and picturesque gardens, you can’t go far wrong with a visit to Stourhead House in Wiltshire. Head to the Temple of Apollo to see where Mr Darcy first proposed to Lizzie in the 2005 adaption of Pride and Prejudice and look out across the beautiful lake, before retiring to the café for a restorative cuppa.

Burnham Beeches – With acres of unspoilt ancient woodland, Burnham Beeches in Buckinghamshire was a perfect choice for the woodland scenes in Robin Hood Prince of Thieves and for The Princess Bride. We wouldn’t suggest this one for a first date, due to how remote it is, but it’s a fantastic place to get away from it all when you get to know each other a bit better.

Chatsworth House – Set in the heart of the Peak District, Chatsworth House has appeared in a whole host of films, including Jane Eyre and Pride and Prejudice. It’s even believed to be the inspiration behind the fictional Pemberley estate, owned by Fitzwilliam Darcy in Pride and Prejudice. Take a look around the extensive grounds or explore the grand house to feel like you’ve just stepped into a period drama.

Haddon Hall – Spending a day at Haddon Hall is like stepping back in time and its medieval good-looks have meant that it is a popular choice for film directors. Take a tour around the house to discover buildings dating from the 12th century, right through to the 17th century. Like Chatsworth House, Hadden Hall is also located in the beautiful Derbyshire countryside and also played host to Jane Eyre and Pride and Prejudice.

Bramham Park – For many, Bramham Park is associated with the annual Leeds Festival or the Bramham International Horse Trials, but it is also the setting for romantic films such as Lost in Austen and Wuthering Heights. Visits to the house and garden are only available by appointment, so the horse trials are a fantastic way to see the gardens and of course the horse trials themselves.

Alnwick Castle – This iconic castle in Northumberland was the setting for Elizabeth, which showed the forbidden love between Queen Elizabeth I and Sir Robert Dudley. Less romantic, but better known, is its role as Hogwarts in the first two Harry Potter films. So if you’re a fan of royal romance or of wizardry, then Alnwick Castle is a wonderful place to spend the day.

Edinburgh – The popular tear-jerker, One Day was filmed in locations across Edinburgh. Follow this link to find a map of many of the locations featured in the film and explore the beautiful city that has provided the back drop for lots of famous films.

Killruddery House – Located in Wicklow and within easy reach of Dublin, Killruddery House is just one of the picturesque locations in P.S I Love You. For true romantics, you could always set a treasure-hunt style challenge, to end at this charming historic house.

Saint Stephen’s Green – This public park in Dublin is one of the locations for film Once, but unlike the characters in the award winning film, you can take a leisurely stroll through the park, before heading to Grafton Street, which is also a key location in the film.

Downton Abbey –We are huge fans of Downton Abbey at Muddy Matches (yes, it’s our bottle of wine and a DVD guilty pleasure). Take a stroll around the famous grounds of Highclere Castle, AKA Downton Abbey and don’t forget to wear your Sunday best, so that Mr Carson doesn’t chase you away.

Game of Thrones – With such dramatic scenery, you’d be forgiven for thinking that cult TV series Game of Thrones was filmed in a far-flung land, but much of the series is filmed in County Antrim. Head to Shane’s Castle to feel like a noble Lord or Lady.