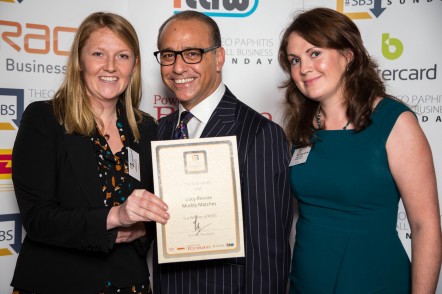 *Warning – this blog post contains shameless namedropping and praise for some fantastic UK and Irish businesses.

On 28th November we had the great pleasure of attending the #SBS2013 winner’s event to celebrate being chosen by Theo Paphitis as one of his Small Business Sunday winners.

On the day, we (co-founder Lucy and social media exec Heather) got our glad rags on and headed to the ICC in Birmingham to meet hundreds of other #SBS winners and Theo himself.

When we arrived there half an hour early there were already lots of people excitedly milling in the hallway, keen to start chatting to their #SBS Twitter friends. Quickly and efficiently we were given our passes and ushered into the giant lecture theatre for two hours of networking, which went incredibly quickly!

As we walked into the event we bumped into new winner Dylan from DMD Architecture and caught up with him about his win. We then had a chat with Sinead from OysterHaven Centre about love, Irish farmers and fun activities at the centre.

Next Lesley and Chris showed us the beautiful designs of their Decorque homeware. After speaking to them we approached fellow sisters in business Sally and Laura to find out about their family-run gift business Send a Thought and their new business Bubblegum Balloons. Sally from parent and child gift site Dorothy and Theodore then joined us.

With only ten minutes to spare before the main talk Lucy tracked down an old friend who she met on during the Muddy Marathon, Heather Gorringe from Wiggly Wigglers. When the talk was about to start, Lucy and Heather Gorringe found potter Linda Bloomfield and Pauline and her daughter from White Haywood Farm and restaurant.

In the meantime MM’s Heather dashed off to speak to Amanda from Xplore4Fun about Treasure Trails and exploring the countryside. When we were all called to sit down, Heather grabbed a spot behind Lucy, next to Pentagon Plastics and Millie from the flamboyant Millie J Shoes, who was carrying some show-stopping shoes.

Ryman’s group CEO Kypros Kyprianou was first on stage and spoke about working with Theo Paphitis and how important small businesses are to the UK.

Kypros was also tasked with introducing the new event sponsors; Kerry Michael from RAC Business (who should win best pun for saying that RAC business was ‘driving businesses forward’) Shannon Diett from DHL Express, Justin Ellis from iLaw and there was a late substitution from Bartercard due to illness.

A flurry of applause welcomed the man behind #SBS Theo Paphitis who gave us some great advice and introduced his companies; Ryman Stationers, Boux Avenue and Robert Dyas. Theo told us that a recent highlight had been assisting with Boux Avenue’s Christmas advert and we can see why he would have enjoyed it.

Then Theo announced an exciting new investment branch to #SBS called #SBSangels with the help of Neil and Laura from Magic Whiteboard, which allows #SBS winners to apply for a share of £50,000 funding.

Theo was exactly how you’d expect him to be from his Dragon’s Den days; he’s smart, funny and really passionate about growing small businesses. So when the opportunity to ask him questions arose, there were more hands in the air than at an Elton John concert.

Among the sensible business questions came a few cheeky questions and a few suggestions for business ideas such as the bank of Theo. Friend of Muddy Matches Victoria from Chelsea Bun Club asked Theo if he fancied joining her on a ladies’ shooting day, let’s just say Theo wasn’t too keen on being surrounded by ladies with guns.

The question that got us all sniggering came from Newton Flags, who asked Theo “If you were a pair of pants, what kind would you be?”

As soon as the questions finished, we raced to join the queue to get our picture taken with Theo and found ourselves near the front along with Scrubbys Crisps and Vintage Classics.

When Magic Whiteboard handed us a free mini whiteboard, we hatched a plan to get Theo to pose with his Muddy:Townie ratio and awarded him a 30% muddy rating. “Thirty percent, I’m at much more muddy than that” he replied jokingly before the photographer said that our sign would reflect the flash and ruin the photo.

Workshops and one last chat

The day ended with a choice of workshops on Ecommerce, Finance, Logistics, Buying and Marketing run by leading professionals from Theo’s businesses managers.

Following the Marketing workshop, Simon and Kate of Foodelity came to tell us about their locally sourced dinner kits. We then caught up with NSA Event Bars, DH Business Services, Advanced In-Car Technologies and fellow March 2013 winner Umesh from Specialist Cars who caught our attention with his winner’s video. We also tracked down Kim from Welsh Crystal

At 7pm the banners came down and the lights came up, but that wasn’t going to deter Dylan from Aqua Design Group from keeping the party going with fellow troopers Jude from GWRFastners Ben from Camera Centre, artist Jack Knight (who told Heather the best fact of the day) and Sabrina from Funky Pumpers.

Thank you so much to everyone involved! If I said hello, but haven’t given you a shout out, let me know at on Twitter @muddymatches.